Food Truck Junkie is back!

The last couple of weeks have been fairly rough on me.  Long, exhausting days at work drain my energy and with gas prices spiking up to $4.00/gal, it has been very rough on the finances.  And it's not just me.  Everyone in the country is going through the exact same things that I'm going through.  But you know... I'm not going to complain at all.  All I can do is face life, one day at a time.  Things will get better for us.  It may not be immediate but things will get better.

NOTE:  These hard economic times will not affect me from going out, once in a while, and having some really delicious food truck eats.

This food truck outing is very special to me and I really want to share it with everyone.  Today, my mother is in Las Vegas, celebrating her birthday in style.  Because of my work and scheduling, I was not able to go with her and partake in the celebration, which is a serious downer.  Instead, I decided to celebrate my mother's big day in my own way while, at the same time, bringing to light a food truck that everyone should make an effort to get out and try for themselves. 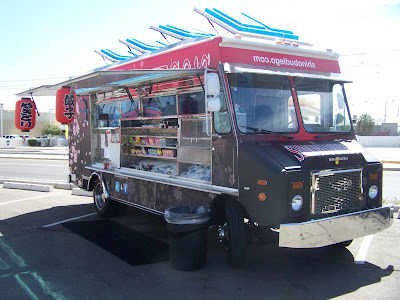 After a long day at work, I cruised over to the Phoenix Ale Brewery to hit up a "One-of-a-Kind" food truck that I am definitely sure will make a big impact on the food truck scene.  I'm talking about Shinobu Diego's Tacos y Burritos, a taco truck infusing the flavors of Japanese cuisine.  One bite of their tacos and I guarantee that your taste buds will get swept away in a flavor-packed Tsunami.

This mother and son team is just starting out, hitting the roads as of February 1st, but Chef and Owner Marc Shelton's passion started five years ago, opening a Japanese-Yakitori stand at a local farmer's market.

"I was going to do it for the summer." Shelton stated, about his first venture attempt.  "I did it one time and it took me two hours to set everything up with the tent and table... Didn't work out exactly and it took an hour to break it down, everybody was gone.  I was already thinking about a food truck but I wanted to get going in doing something.  I just wanted to do that and that just didn't pan out."

It was during the time when "The Great Food Truck Race" was on the air on Food Network that Shelton had an epiphany.

"I was watching all that and I was like, 'I can do that!'  They're doing it Korean style and I can do that Japanese style.  I worked in a Japanese restaurant for twelve years, my grandmother is Japanese, and I love Japanese cuisine and I'm from Tucson, which is taco central."

And from that moment on, his idea to infuse Japanese-style flavors into Mexican tacos grew and has now become a food truck reality.  And, if you've read my previous post about sushi and Japanese food, Shinobu Diego's definitely caught the eye of yours truly.

When I walk up to the truck, I can just smell the teriyaki sauce coming out from the truck and I know that something awesome is being prepared.  Made on locally made tortillas, these tacos are just packed with amazing flavors and textures that just explode in your mouth.  The meat is marinated twice and all his sauces are homemade, truly showcasing his amazing and deep passion for Japanese cuisine.

And, for those of you who tend to lean on the Vegetarian side, the Shinobo Pollo is right up your alley.  Potatoes marinated in teriyaki sauce, topped with slaw, cucumbers and carrots in his homemade vinaigrette with a cilantro-green onion relish, topped with sesame seeds and crema.  Now, I'm a straight-up meat and potatoes kind of guy but I can say that if I had to give up meat for lent, I could eat these tacos and not worry about giving up meat in the first place.

There is no doubt in my mind that Shinobu Diego is going to make a big impression with their Japanese-infused tacos and Shelton is looking to expand in the near future into California.  But, until that day comes, this loyal customer will spread the word of these awesome tacos.  To keep on top of where Marc and Shinobu Diego's will be throughout Phoenix, you can follow them on Twitter: @ShinobuDiego or you can view their schedule at www.shinobudiego.com. 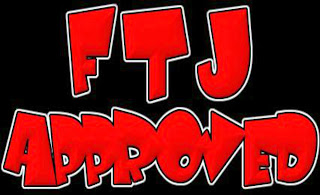