The Food Truck Round Up was a great success and I’m looking forward to attending the next festival whenever Superstition Farms holds it again. I heard that there will be another festival at Salt River fields that will take place over a two-day period in January. Hopefully, it won’t be a major disaster like it was this year. If the festival organizers put a ticket cap and have $2/$4 plates that will allow quick lines, then the event will go off without a hitch. Maybe F.T.J. should be on that committee…

With the BBQ Festival from last Saturday behind me, it's time to feature another food truck making a name for themselves out here in Phoenix.  And about time too, right?! 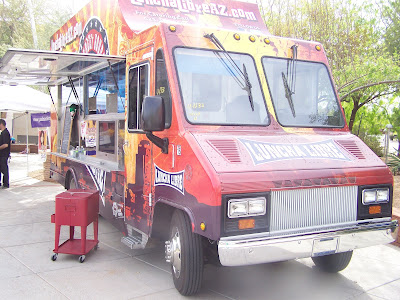 Lunch Libre started back in December 2011, owner and chef Tim Cobb wanted to do something that would make his food stand out from everybody else.

“We have the ability to do just about anything.” Cobb stated. “We didn’t lock ourselves in to, like, BBQ or hot dogs or anything like that. We kinda stayed with the Southwestern theme and played with Arizona flavors.”

Tim and his wife, Kim, wanted to do something different after leaving a restaurant that they had partial ownership in.

"It was difficult to find a job and, at the moment, the thought of working for someone else was not very appealing." Cobb explained, "I have been executive chef at several places and have worked in private clubs and resorts.  So, we decided to take the chance and start the truck."

Luncha Libre is all about specializing in Arizona and Southwestern style flair and it shows in everything that they offer. Using local and fresh products, everything is homemade, including their chips and salsa that comes alongside any quesadilla or torta. And the homemade chips and salsa are just the beginning. In short, their quesadillas are greatly described in two words… absolutely delicious.

The Steak and Bleu quesadilla is just that… Steak and Bleu Cheese. And a savory combination, at that. The tender steak just packs big flavor that meshes so well with the bleu cheese. And to match up with that, the Marco Pollo is another savory construction but facilitating Asian flavors, which is Cobb's favorite cuisines to work with. Grilled chicken with ginger, pico de gallo, and hoisen sauce, all wrapped in a quesadilla, truly brings the East to the Southwest. The homemade chips are great for scooping off anything that tends to dribble out of the quesadilla and the salsa gives it all a fresh zing, if poured directly on prior to each bite you take.

Asian cuisine is not the only thing Cobb wants to give a Southwestern flair..

"But one of my other very favorites is Middle Eastern/Mediterranean, which I am still looking at ways to use, and I will probably try to roll out this summer with some new recipes for the hotter months."

Overall, Luncha Libre is a truck that can't be missed. So, if you ever see the Luncha Libre truck as you go about on your daily routine, pull over and take part in what Cobb has to offer for you.  Thier quesadillas and tortas, filled with Southwestern-infused worldwide cuisine and flavors, is a sure hit for those who love a twist to a Mexcian classic and the food is something that Cobb takes pride in preparing for you.

"In some way, when you are preparing the food, you are playing a big part in developing memories for people as they come together for celebration, sadness, happiness or just trying to reconnect.  I have a chance to be part of those important events in their lives.  I have always felt that food brings people together and, as a result, fellowship happens. The better the food, the better the time."

And, yes, that is the new "FTJ Approved" design.  The only thing that I need to do now is to choose either the bumper sticker or the car magnet.  Input is greatly appreciated.  Thanks!

Have a great rest of the week and, as always, keep on truckin'!